For further information on the graduate school and upcoming events see the web page http://www.rtg-qm3.de/ .

Check out our recent review article on 2d materials modeling

Poster on the world’s smallest lasers

The Maritime Week in Bremen is, amongst other things, a showcase for scientific work that’s going on at the University of Bremen. Frederik Lohof is the PhD student in the QM3 graduate school associated with project P4 and was there to explain the purpose of developing nanoscale lasers from new materials to anyone who would ask. The poster can be seen here: 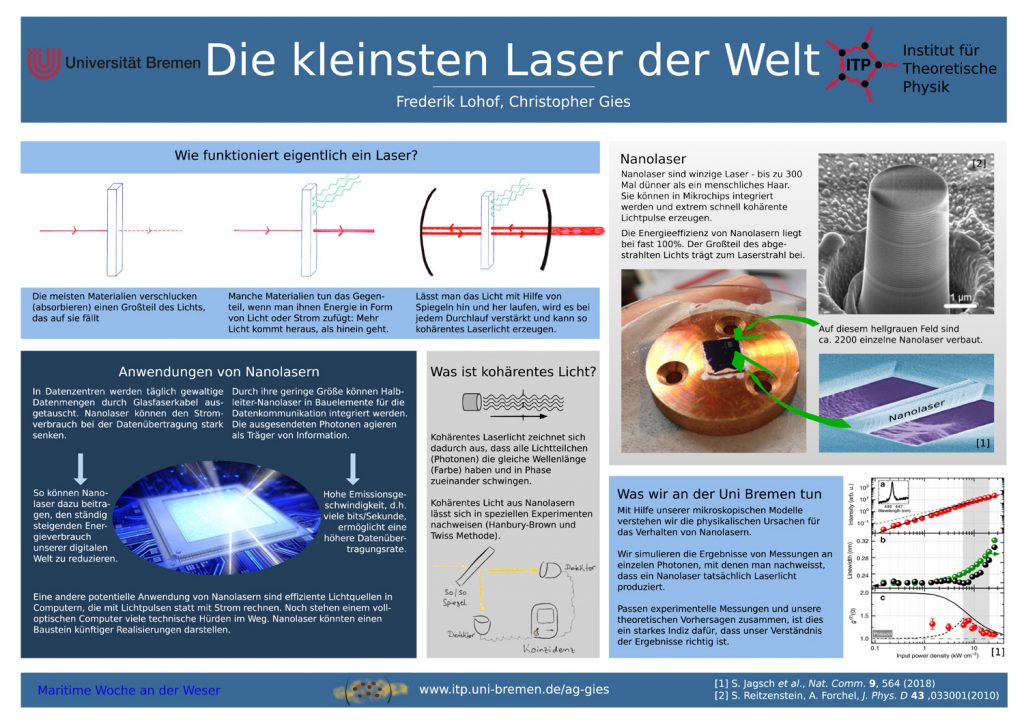 Van der Waals heterostructures (vdWH) consist of vertically stacked layers of  atomically thin quantum materials. These can be functional, such as TMDs, or insulating, such as hBN or substrate materials like SiO2. Charges in the TMD layers of a vdWH are highly susceptible to their surroundings, as the electric field lines reach out of the layer into the neighbouring materials where they become screened.

In our recent publication in Nano Letters, we have investigated which role the interlayer separation has in this context. In fact, layers are not separated by an indeal plane boundary, but by a finite gap in the range of several angstrom. By combining a macroscopic treatment of the dielectric environment in vdWH with microscopic calculations of the many-body optical properties, we have identified signature line shifts due to variations in the interlayer distance that agree very well with recent experiments.

The work is a collaboration with the groups of Dr. Kaniber, Prof. Finley and Prof. Holleitner at TU Munich.

In the wake of graphene, a class of new materials has emerged that only consist out of a single or few layers of atoms, but possess a direct band gap. Despite being atomically thin, they strongly interact with light, making them promising candidates for active materials in future generations of optoelectronic devices. Amongst these new semiconducting materials are transtition-metal dichalcogenides (TMDs) with band gaps in the visible range, and black phosphorus (BP) with a band gap in the infrared. Being atomically thin, TMDs and BP react sensitively to their environment, e.g. in the form of a substrate or heterostructure, and strain, which can be used to tailor and control their macroscopic properties. Emission and absorption of light is strongly determined by the Coulomb interaction, which correlates charge carriers (electrons and holes) into excitons and other species of semiconductor excitations.

We have developed an interdisciplinary approach that uses semiconductor many-body methods on the basis of material-realistic input from ab-initio G0W0 band-structure calculations and Coulomb matrix elements. These calculations are performed in the partner group of Tim Wehling (project P2) by Gunnar Schönhoff and Malte Rösner (now at University of Souther California with Stephan Haas).

We apply and advance these methods to describe optical properties taking into account excited carriers in the band structure. Excitation and carrier dynamics is intensely studied in the group of Frank Jahnke (project P5).