A selection of models studied by our group was implemented in Javascript to make them accessible for everyone to study. You can explore those directly on this website.

A model of financial markets based on the Ising Model.

The agents are given two possibilities: To buy or to sell a given stock. Each agent is influenced by the price as well as its nearest neighbors. The conflicting character of a minority game combined with a ferromagnetic Ising model causes frustration across scales and emerges expectation bubbles and volatility clustering known from real markets.

A model of scientific paradigms

Scientists suggest ideas to each other and accept those new ideas with a probability proportional to their popularity. Once a scientists has scrapped an idea he cannot reconsider it. An innovation rate controls how often scientists come up with new ideas.

A model of multiple epidemics

This is a minimal model of how epidemic spreading interacts with immunity of individual hosts: Every agent only gets infected once by each disease. Older diseases thus face a harder time while new diseases sweep over the system.

This is a simple neural network model which exhibits self-organized criticality (SOC). Based on local rules only, the network evolves towards criticality, showing typical scale-free avalanches matching those recently observed in the brain. 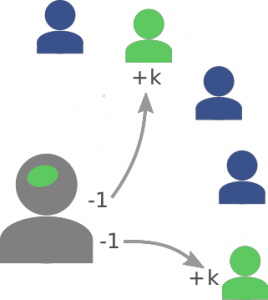 We ask: “Could a social hierarchy emerge and persist between two groups distinguished by easily observable characteristics, even if they are identical in terms of intrinsic properties?”

In contrast to the implementations listed above the following programs make use of the full features of the SpiMoSim library. These implementation are meant for advanced users and those who are familiar with Javascript and might want to use SpiMoSim for their projects.

A model of financial markets based on the Ising Model. 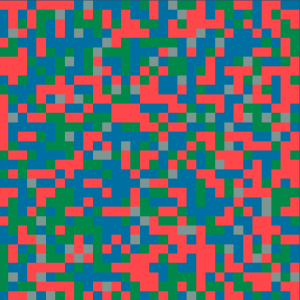 The 50-50-Stalemate Model simulates the formation of two different opinions in contrversial debate using pairwise interaction between agents. Controversial meaning that people tend to have strong opinions about the topic and maybe repel the opposite instead of convincing them. The original paper shows that for larger values of the repel parameter the system tends towards an equilibrium, where the two opinions are trapped in a stalemate. On this interactive website the model is implemented using the spiMoSim library from Pascal Grafe.